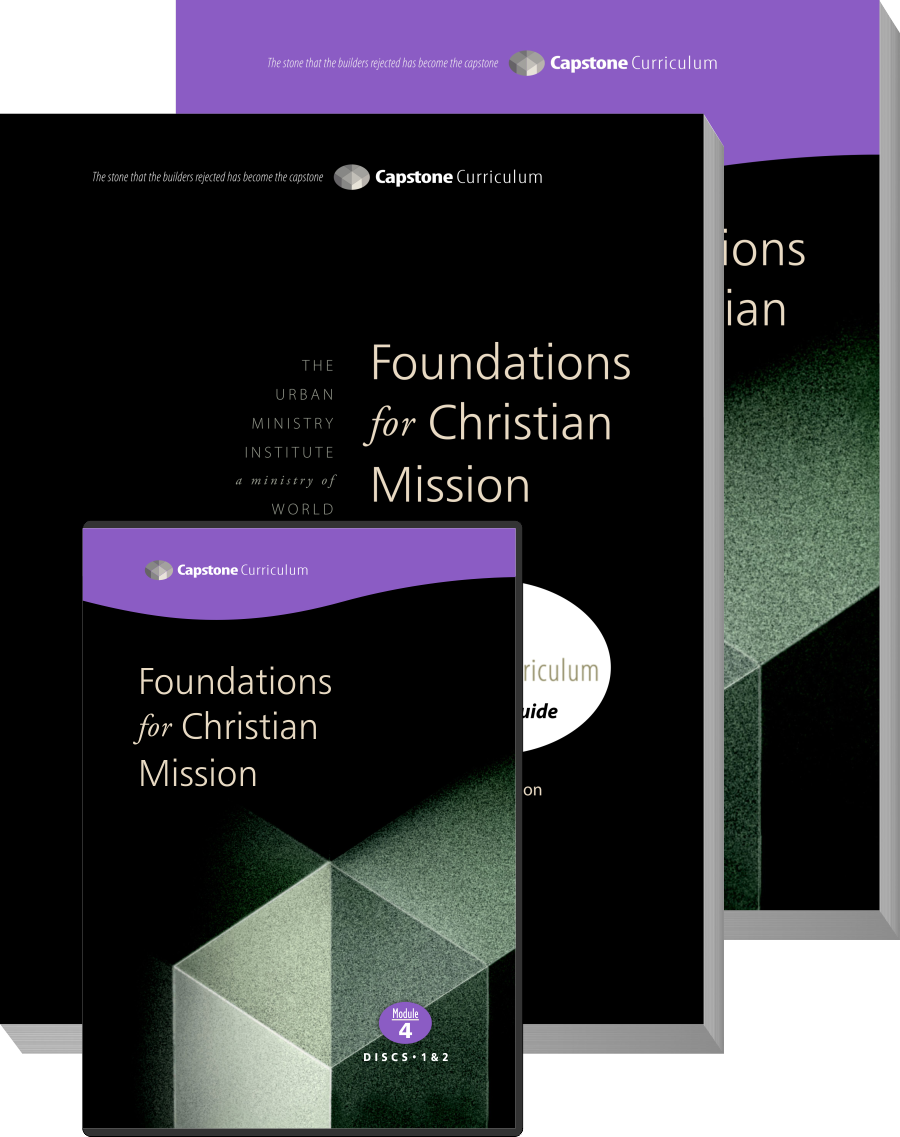 The theme of mission has not received the kind of focus and attention in our urban churches that it should. Having been seen largely as a work across the ocean in far flung corners of the world, we have failed to give it the kind of critical analysis that it deserves. From one vantage point, the entirety of the Christian faith could be seen as a response of mission, the call to go to the nations and proclaim Jesus of Nazareth as Lord and King of the reign of God. The NT is a collection of missionary documents given to churches that were founded by the apostles, the original missionaries of the Christian faith. God himself is the original missionary, coming to the world in Christ and reconciling it to himself (2 Cor. 5.18-21). Indeed, Christianity is mission.

In this important module we explore various biblical perspectives of mission and God’s people, from the perspective of Mission as Drama, as Romance, and as War. Each of these biblical images provides insight into the character of God’s covenant promise and his working through the various epochs or sections of time to bring about redemption in Christ. We also explore two important subjects relevant especially to urban missions, the Bible’s vision of ministry in the city and to the poor. From the beginning, God has charged his covenant community to live in such faithfulness to the Lord's covenant that justice would come to the city, and poverty would be replaced with justice and righteousness.

The theme of mission has not received the kind of focus and attention in our urban churches that it should. Having been seen largely as a work across the ocean in far flung corners of the world, we have failed to give it the kind of critical analysis that it deserves. From one vantage point, the entirety of the Christian faith could be seen as a response of mission, the call to go to the nations and proclaim Jesus of Nazareth as Lord and King of the reign of God. The NT is a collection of missionary documents given to churches that were founded by the apostles, the original missionaries of the Christian faith. God himself is the original missionary, coming to the world in Christ and reconciling it to himself (2 Cor. 5.18-21). Indeed, Christianity is mission.

This module, therefore, deals with this key subject with the intent to help you, God’s emerging leader in the city, to understand both the theology and ramifications of mission from a biblical point of view. In a real sense, we cannot understand what God is doing in the world through mission without an overview of the vision of God’s purpose and working. So, in our first two lessons we will look at mission through four distinctive lenses: mission as drama and promise, and mission as romance and warfare respectively.

In our first lesson, The Vision and Biblical Foundation for Christian Mission (1), we deal with the perspective of Mission as the Drama of All Time. Out intent here is to provide a framework for understanding the work of mission from the Scriptures themselves. We will begin by giving a general definition of mission, and then outline a quick summary of the critical elements of a biblical understanding of mission. We will look at mission through the lens of story and drama, showing from Scripture that mission is God’s sovereign working through history through the various epochs or sections of time to bring about redemption in Christ. We also explore Mission as the Fulfillment of the Divine Promise, envisioning mission as God fulfilling his promise as the covenant God of faithfulness. We will describe the role of biblical covenants in the Scriptures, and trace God’s action as response to his covenant promise to Abraham, confirmed in his sons and the patriarchs, identified with the tribe of Judah and clarified in the promise to David to have a perpetual heir on his throne. In the person of Jesus of Nazareth, the promise of Abraham and David has been fulfilled, and now, through mission proclamation of the Gospel, the promise of new life is offered to the nations through the preaching of the cross.

In lesson two, The Vision and Biblical Foundation for Christian Mission (2), we will explore Mission as the Romance of the Ages and as the War of the Spheres. These images in Scripture allow us to see just how critical mission is to our theological framework as believers. As the romance of God, we see God’s determination to draw out of the world a people for his own possession. We will review this grand theme, beginning with the history of Israel as the wife of God, and her unfaithfulness through idolatry and disobedience. We will trace this theme in the person of Jesus, and see how the new covenant expanded the people of God to include the Gentiles. As the warfare of the ages, we see the proclamation of God’s kingdom rule in the person of Jesus of Nazareth. Beginning with the clear affirmation of God’s sovereignty, we see God has determined to reestablish his rule over his creation, which fell from his grace through the rebellion of the devil and humankind at the Fall. Since this time, God has taken the position of warrior to bring the universe back under his rulership. In the person of Jesus of Nazareth, God is reasserting his right to rule over the universe, and mission is the proclamation of that Kingdom come in Christ.

In lesson three, Christian Mission and the City, we turn our attention to the object of mission and God’s intent for the city and the poor. We begin by looking at the ancient city, its organization and characteristics, especially its symbolic feature as a sign of rebellion against the Lord. We will consider the spiritual significance of the city, looking at God’s interaction with a number of cities in Scripture, and exploring their meanings. We will see how God has adopted the city concept for his own purposes, overruling its association with rebellion and idolatry, and redeeming its meaning for mission, and for the future glory of the Kingdom. In this lesson, then, we will also provide a rationale for our involvement in urban mission. As the seat of influence, power, and spiritual activity as well as the magnet for the oppressed, the broken, and the poor, we as 21st century disciples must strive to speak and live prophetically to the city. As the picture and symbol of our spiritual destiny and inheritance, we must do all we can to evangelize, disciple, and plant churches in our cities, both at home and abroad.

Finally, in lesson four we explore another critical component of Christian mission. In Christian Mission and the Poor, we will examine the concept of the poor and mission through the lens of the rich biblical concept of shalom, or wholeness. As the covenant community of Yahweh, the people of Israel were called to live in such faithfulness to the Lord’s covenant that poverty would be replaced with justice and righteousness. Building on the fact of God’s deliverance of his people from Egypt at the Exodus, God gave his people in his covenant a blueprint for justice that would address the issue of poverty and oppression. Armed with this biblical vision, we will then consider how Jesus as Messiah and Head of the Church fulfills the Messianic prophecy regarding the One who would bring justice and peace to the poor. Jesus as Lord and Head of the Church continues to express God’s mandate for shalom among the people of God, and through his people, to the world. The Church, God’s new covenant community by faith in Jesus, is called to live in shalom and demonstrate both to its own members and to the world the justice of God for the broken. This is possible now because of the Holy Spirit who empowers and strengthens the people of God today.

As believers in Jesus Christ, each of us, every congregation has been redeemed in order that we might be redemptive, proclaiming and living out the truth of God where he has placed us. Truly, to be Christian is to be mission-oriented and mission-formed; we were born from above to become co-laborers with God in his mission to win the world for his Son (Acts 9.15).

Capstone Curriculum is a 16-module training program, taught at a seminary level, which we specifically designed to serve as the most essential knowledge and skill learning necessary for effective urban ministry. Each module (course) comes with a Mentor’s Guide, a Student Workbook and two DVD’s (four hours of video).

Each module also has required textbooks, and this graphic is linked to the reading assignments associated with those textbooks for that specific module.

Some modules have Suggested Readings that would enhance student learning. While these are not required assignments, they are included for further study if your students are interested.

A few textbooks are also available as audio books. The books that are will have this linked icon in its description as well.

Two Capstone modules (Module 5: Bible Interpretation and Module 11: Practicing Christian Leadership) have reference texts that are phenomenal resources for any pastor or leader. This icon will alert you to those texts.

Each Capstone module has assigned textbooks which are read and discussed through the course. We encourage students to read, reflect upon, and respond to these with their professors, mentors, and fellow learners. Because of the fluidity of the texts (i.e., books going out of print), the required textbooks list will be different from what is listed in your Capstone Curriculum workbook. The textbooks list with each module is the OFFICIAL Capstone required textbook list.

Students: Part of our coursework requires that you purchase, read, and reflect upon the textbook(s) for the course. The assignment is to read each required textbook and write a precis (concise summary) of its main point, as you see it. Please summarize its major theme and argument, and then give your concise evaluation for each reading. Although the Student Workbook only shows space for two readings, the student must write a summary for each reading by using the back of the form. It is of utmost importance to us for our students to analyze a text, that is, to read it, understand its thesis (main point), articulate its argument in a respectful way (whether you agree with the author or not), and then respond as to why you agree or disagree with the thesis. This practice helps strengthen your ability to engage different opinions in a respectful way, and learn to listen to others and respond with clarity and respect. In this way, you learn to dialogue with and discuss with others whose beliefs are different than your own.

Capstone is also available on Kindle and is a handy complement to your Capstone Students Softcover Workbook; the accessibility of the digital editions will be a lifetime resource for sermon preparation, Bible Study, and theological research.